Anicius Manlius Severinus Boethius (A.D. 477–524) was a Roman statesman and theologian who came into public service under the Ostrogothic King Theodoric. Boethius composed several philosophical handbooks and translated some of Aristotle’s works, all of which greatly influenced the early centuries of the Middle Ages. 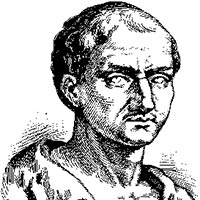