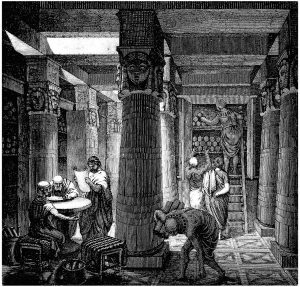 The impact of Alexander the GreatAlexander the Great (356–323 B.C.) was King of Macedon and went on to create one of the largest empires of the ancient world by the time he was thir... on Christianity is greater than most persons realize. Some scholars argue that he is the source of the myth of Jesus’ divinity, while some religious persons see in Alexander a type or precursor for ChristDerived from a Greek term meaning anointed and is equivalent to the word “messiah” from Hebrew roots. The anointing references the act of installi.... Regardless, at a minimum, he provided a bridge between the monotheistic culture of the Jews and the quasi-polytheistic doctrineis derived from the Latin word for teaching, doctrina, and is an important aspect of Christianity more so than other world religions because Christian... of Christianity (trinity) facilitating the conversionThis term is derived from the Latin word for “turning,” and is a theological term that refers to one turning his will from evil to good and is gen... of Jews and GentilesAn ancient term referring to people who are not Jews or otherwise descended from the house of Israel. In Christianity, over time, it also came to be u... to Christianity. What am I referring to?

There are a number of parallels between Jesus(c. 4 B.C.–A.D. 30-33) Also known as Jesus of Nazareth, Jesus Christ, the Messiah, and Savior of the World. He is the founding figure of Christianit... and Alexander. They both died when they were 33 years old. They both claimed divine sonship and dual paternity (Heracles for Alexander) and as human beings with flesh and blood they broke the barrier between humanity and the divine. Virgin births are attributed to both and world rule were their destiny, yet they both died before they fully realized their missions to bless all humanity. The popular ancient myths surrounding Alexander certainly contributed to the acceptance of the Christian message, even if its influence was subliminal.

A Collection of Inspiring Essays.

God is love, and because we all have a spark of His divinity in us, we have a strong core need to love and to be loved. However, because we are born into an imperfect world, all of us have been disappointed by others we depended on for love. This betrayal creates an emotional black hole at the center of our personal universe that sucks us down into a life of loneliness, frustration and pain.

How do we escape the gravity of our emotional black holes? Can we really become free to love and enjoy life? As Mr. Hallstrom shares the life lessons he has learned from a variety of intriguing and often difficult experiences, you may discover a path of healing that leads to freedom and happiness.